Just south of me in the state of North Carolina rests the town of Littleton. Located in Halifax County and once known as Little People Town, it historically has a population just under one thousand. Well that is, living.

This quaint little southern has become known more so as “Haunted Littleton” as many places within the town have had reports of paranormal activity. Of course me and the crew were already packing our equipment….

Founded some time before the Revolutionary War by William Little, Littleton spans just at a mile. The townsfolk survive mostly on lumber manufacturing and farming.

Upon arriving we were greeted by our host, Stephen Barcelo, who owns and operates the Cryptozoology and Paranormal Museum within the 1895 Alston House. More on it in a moment….

Stephen was gracious enough to take us on a tour of the town offering a history lesson on what little is known about the town and directing us to the reported “hot spots” where townsfolk and visitors have reported possible paranormal activity.

Our first stop was that of Person’s Ordinary, as it’s simply called and was built in 1739 and owned by Thomas Person, known for his anti-federalist leadership.  One of the last surviving Colonial-era inns in North Carolina, Person’s Ordinary operated as a tavern, servicing weary travelers along the stage-coach line where they could get a meal and a night’s rest. It remained a tavern until the 1830’s at which time it was converted as the town’s first post office.

Today it owns a spot on the list of historical landmarks and has been returned to look as it did during its tavern days.

Many reports of activity have come from the tavern including flickering lights and faces peering from windows but the most telling was that of a murder. As the story goes, two travelers whom were staying on the second floor, began to brawl resulting in one killing the other. Remnants of this act remain decades later with traces of blood still on the original floor within the tavern. Easily seen under a UV light, the adrenaline was quickly pumping in here. And even though it wasn’t what we came for, we wanted in. And we’d get our chance….

Stephen then told us about Lakeland Theatre, the once working school that was closed in 1977 and later converted into the towns only theatre for performing arts. Multiple apparitions have been reported here as well as members within the audience seemingly being pushed by “ghost hands” as when they turned around to complain, no one was there. Unfortunately the building has demolition plans in its future to make way for new construction and can no longer be toured or investigated.

Continuing on our tour, Stephen led us to the house that we came to investigate. The Dollhouse. A two-story home filled to the brim with antique and modern-day dolls and collectibles. Are the wheels already churning. Antiques? Creepy dolls? You got it. We were thinking the same thing and even cooler we had the honor of being the first paranormal group allowed inside to investigate.

After getting a proper tour of the home and stumbling upon childhood dolls, we were led outside and directed down a dirt path along the property that led to a cemetery. In the middle of the woods. Oh yeah.

The extraordinary fact about this cemetery however  is that it dates back to 1637. Unfortunately most of the headstones have been reduced to rubble.  Walking along as Tom and I took pictures and video, the air was heavy and the moment was surreal. I was undoubtedly in my element, albeit the bugs were sharing it with me but I in no way shape or form rushed this part of the tour.

Reluctantly we left, returning back to the museum where Stephen began to tell us more about the items he had on display. The most intriguing would be the two dolls he had locked up in glass cases. He told us the story of how they were surrendered by families suspecting they were haunted.

Stephen continued and told us of how he’d discovered antique children’s toys in the attic of the museum. He also told us of how he and his family had experienced several unexplained occurences within the museum which doubles as their home. He described the smell of cigarette smoke, things disappearing and reappearing at random, convincing them spirits were about.

Upon meeting up with the rest of the members of the team, we made our way back to the dollhouse to set up our equipment and get started investigating. It can’t go unsaid that the night was off to a great start as a fury of thunderstorms met us during the tour and remnants remained. Storms are often thought to enable spirits to obtain energy, increasing their chances of making contact.

And so it began…. 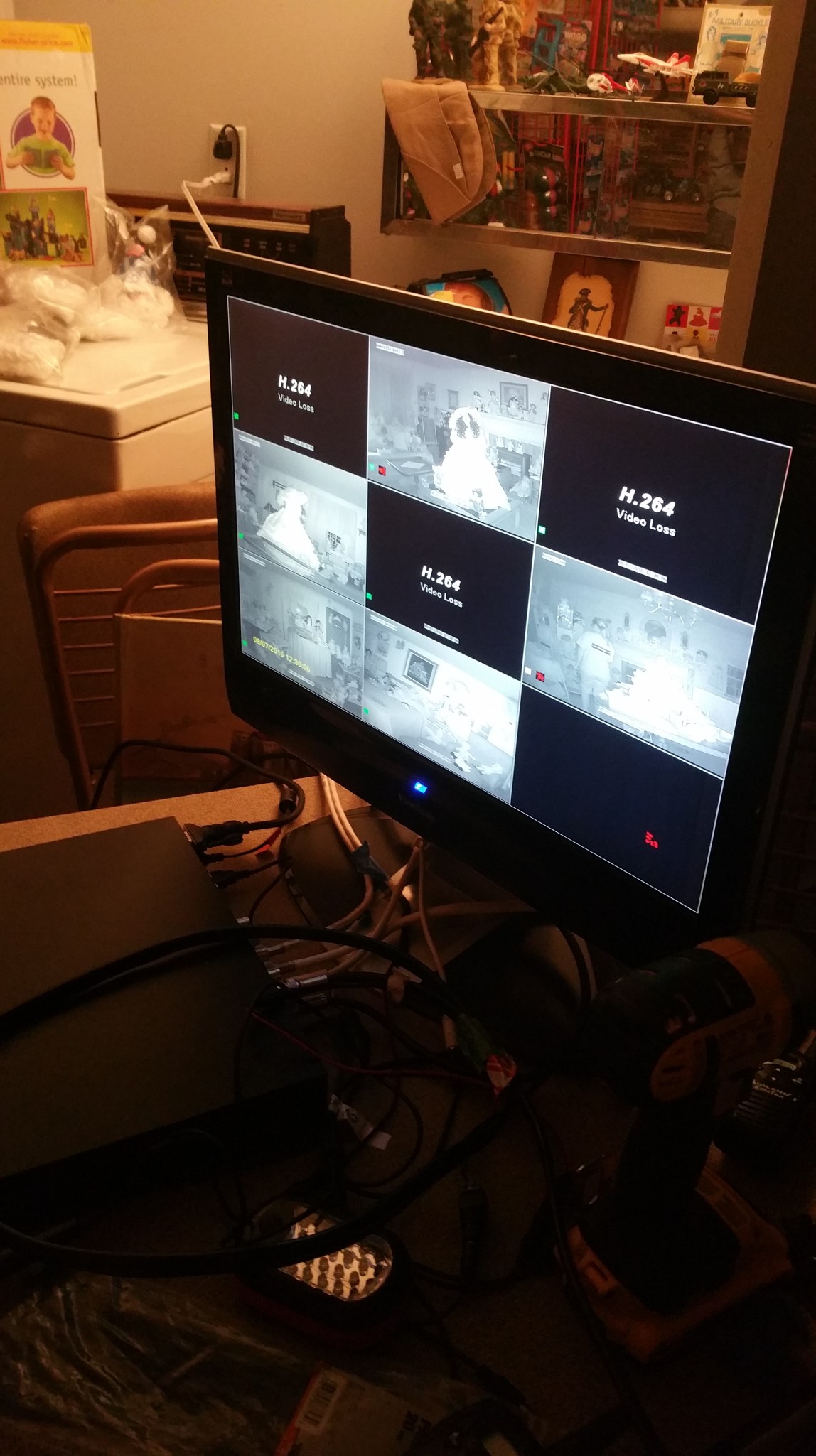 We separated into teams, one taking the upstairs, one the downstairs and one outside. Our group took the upstairs first and I armed with my new toy, an IR light that enabled me to capture pics in the dark, settled down amongst the creepy doll faces staring back at us. To our dismay, the rooms on the second floor proved to be quiet for us and as we rotated downstairs for the most part it remained quiet. It wasn’t until we had rotated outside that I had my first experience of the night.

Walking along the gravel driveway that leads back to the graveyard, we were busy taking pictures and truly admiring the peaceful night. I had lingered off a bit from the pack and was busy snapping pictures when I heard most clearly the sound of a man’s voice next to my ear and whisper “hey” in a quick fashion, jolting my attention. I knew no one was around me but by instinct I turned to yell at whichever team member it was. But of course, there was no one there and when I yelled across the yard to my team members if they had heard anything, they all shook their heads confirming they hadn’t.

That unfortunately I’m learning happens a lot with ghost hunting. We often have group experiences but more often than not we each have our own individual experiences that we are left trying to evaluate as to whether it really happened or simply a figment of a tired mind after countless hours of experiencing nothing. It’s not easy. And let me tell you, ghost hunting offers so much opportunity for scrutiny. So a good investigator, is a skeptical investigator.

That incident outside was unfortunately my only experience this night at the dollhouse but I did however hear something with the group as a whole. We always carry walkie talkies in part for safety and simply because well they are big kid toys we never get enough of. This night however they decided to take on a mind of their own. Another thing I’ve learned is that it is thought that spirits, entities, ghosts, whatever you fashion calling them, have the power to manipulate electronic equipment. Throughout the night the walkie talkies were going off on their own. At one point a child’s laughter came through the tiny speakers which made all of us question as to where the child was. Alas, no child was on the property. Just us.

Now the Person’s Ordinary. That was a bit of a different story, at least for me. This is where in the night Je nay nay as my team members call me, got a little brave. I convinced two other female team members to go along with me to investigate the tavern. Initially we were joined by Stephen’s daughter who much like her father was very knowledgeable about not only the tavern but the town as well.

We settled initially in the upstairs room where the alleged murder took place and within ten minutes of the session starting I saw from my peripheral view a cast of white light floating across the room across the hall. Naturally my camera was positioned on the room that we were in and instinctively I adjusted it but was disappointed when the disturbance did not occur again. I only bring this up even without documented proof because the next morning I walked in on a team member describing the same exact experience upon his session with other team members prior to mine. One of those things that’s frustrating as hell because you know what you saw but  you don’t have a damn thing to show the world. Just your voice. And boy is that small.

We decided to move over obviously to that room continuing the session and within minutes again to my dismay I saw movement but my camera was facing the opposite side of the room so again..I got nothing. It’s discouraging to say the least to have nothing to show but it certainly keeps me eager to continue investigating.

Not much else happened after that so within twenty minutes or so we decided to finish the night downstairs in what would have been the dining area at the time of its tavern days. We unfortunately did not experience anything here either that is until I tried to turn off the recording device I was using that I had borrowed from a team member simply because it was shinier than mine. It seemingly went haywire on me, as when I’d shut it off it would immediately turn back on again or the buttons would freeze all together. I went back and forth a few times fighting with it until I gave up, deciding to just leave it recording until I got outside. The minute I walked outside, down the steps and away from the building, I attempted to turn it off again and much to my surprise I had no problems. Just as the walkie talkies had done earlier, it was as if something or someone had manipulated it to malfuncting.

Aside from that, this lovely town proved to be quiet for us this night. It was fun to get the tour, visit the museum and learn of the history of this little country paradise. But sadly we walked away with no solid evidence of a haunting. We were honored to have the pleasure of investigating the dollhouse and perhaps have the opportunity to do it again. If you decide to go for a visit, find Stephen and tell him CVP sent ya!

Please check out the video footage of the town we captured as well as a short interview I did with Stephen and lastly our flight footage of the dollhouse. Thanks for reading!